Australian Medicine exports drop by 30 per cent in one year

The continuing decline in Australian exports of medicines has highlighted the enormous challenges facing the local industry as they struggle to remain competitive in the global pharmaceutical industry.

Just five years ago, medicines were Australia’s largest manufactured export, bringing in more than $4 billion to the local economy.

Today, manufactured medicines have slipped to second place behind the motor vehicle industry. If the trend continues, medicine manufacturing will shortly drop to third. 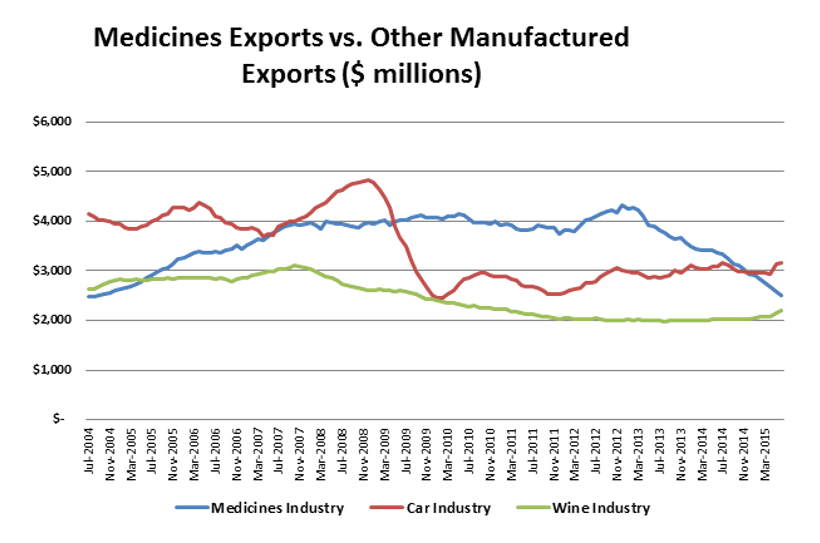 Such a dramatic fall in the rankings should be ringing alarm bells in Canberra.

At a time of growing demand for innovative, safe and effective medicine products in Asia, particularly in China, Australia is set to miss out on an enormous economic and job creating opportunity if our politicians fail to get the policy settings right.

The Government must do more if it wants to fulfil its promise to encourage growth in the biopharmaceutical sector.

A shrinking Australian dollar can help to make our exports more competitive, but on its own, it will not reverse the trend.

A lower dollar also cannot compensate for the enormous challenges facing industry and the broader Australian economy as the mining boom comes to an end.

In a submission to the current Senate inquiry into Australia’s Innovation System, Medicines Australia outlined key principles to invigorate the Australian medicines industry, which included:

The submission argued that by following these key principles, Australia could take advantage of the Asia boom and at least double current medicine exports, but with stiff competition from nations such as Singapore and Japan, the time to act is running out.

Medicines Australia is encouraged to see that the Australian Parliament is beginning to identify science and innovation as a key future economic and employment driver for this country, however, the rhetoric needs to be matched with action.

This is the opportunity that Medicines Australia has been highlighting to policy makers for some time.

Medicines Australia and its member companies stand ready to work with Government to achieve this important goal.